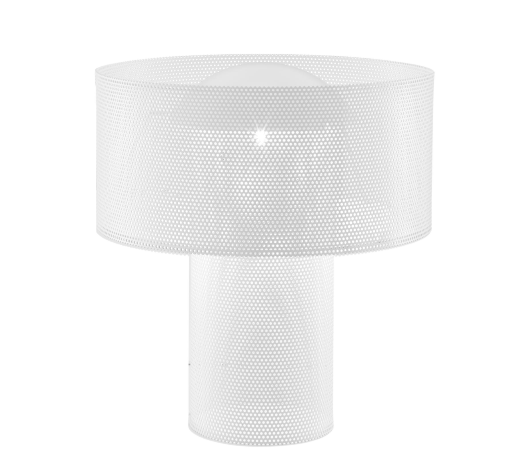 Asola is a glimpse of the Seventies and Eighties, as much in terms of the material used – perforated steel – and its white colour as its stylised mushroom-like shape. The latter evokes the emblematic lights of the period such as Giancarlo Mattioli’s Nesso light (1967) or Mario Botta’s Shogun (1986), which was designed for Artemide.

Evangelos Vasileiou was born in Athens in 1976.

After graduating in interior architecture and product design from the école Camondo, he continued his architectural studies at the école de Paris-Malaquais , where he obtained his DPLG.

In 2001 he was honoured with an ‘appel permanent’ from the VIA, and has subsequently worked in the fields of architecture, design and education.

A popular guest lecturer, he is currently temporary professor in the first year masters’ course at the école d’architecture de Paris-Malaquais. In design terms he collaborates with a range of companies, whilst simultaneously working on refurbishment and scenography projects.

His works appear in a number of exhibitions and galleries, both in France and abroad.

Based in Paris, he opened a second agency in Athens in 2007, dealing principally with architectural and interior design projects.