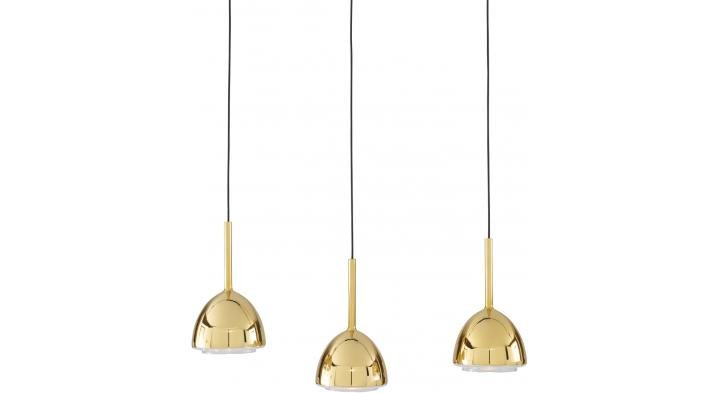 The sobriety of the black lacquered stem of the Brass Bell reading light enhances the golden brass finish of the borosilicate glass shade. Borosilicate glass, having a low coefficient of thermal expansion, is less sensitive to temperature shocks. A warm alliance of copper and zinc, brass is the only metal capable of imitating gold. It is noted for its colour, which varies from pink to yellow.

Patrick Nicole Zulauf was born in 1974 in Langenthal, Switzerland.
He spent most of his childhood at the aircraft work-shop of his father, an aeroplane restorer. At a nearby junkyard he collected various bits and pieces and transformed them into new, useful objects.
After training as a design engineer and metal caster at the company JRG in a small village near Basel, he continued his creative work as a draughtsman at the design studio of Hans Zaugg in Solothurn between 1995 and 1997, where he worked on designs for things like furniture, lighting, phones and more.

In 2000, Patrick deepened his knowledge with studies in interior architecture and product design at the school of art in Basel (HGK FHNW FFI IN3). He then collaborated on projects for the Swiss Expo.02 pavilions in Neuchâtel and worked as an assistant to Christophe Marchand and Patrick Reymond (Atelier Oï) in the industrial design department at the ECAL in Lausanne.

In 2003, while working as an exhibition designer for the Art Fair Basel, Patrick got to know the founder of BELUX; he subsequently started working as an industrial designer and product engineer for BELUX (which later became part of the VITRA company). In the following years he focused almost exclusively on light and the construction of lighting, developing various innovative lighting systems both for the home and for exhibition, in collaboration with big names such as Frank Gehry, Herzog & DeMeuron, Hella Jongerius, Naoto Fukasawa and Antonio Citterio.

In 2013, Patrick Zulauf opened his own interdisciplinary studio in Basel, working on both one-off pieces and series-produced items as a designer and product engineer ever since. Since March 2015 he has also been designing lights for the Swiss company GO4LIGHT AG in Liestal, Switzerland.