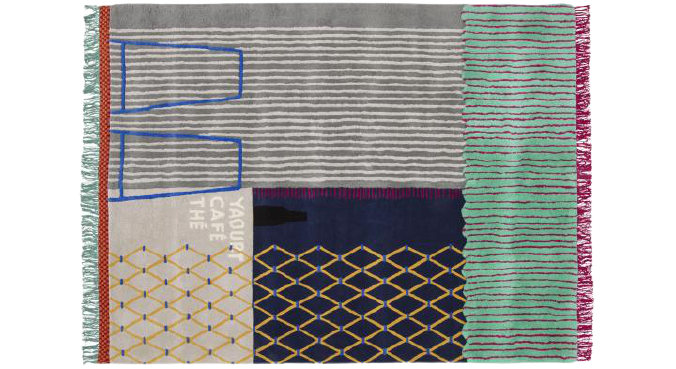 The Maquis rug is an African evocation which blends the coloured patchwork of the maquis fronts or the sub-Saharan wax pagnes with their geometric or symbolic motifs, different tuft lengths depending on the various patchwork elements, and different-coloured fringes – fuchsia and green – at its two extremities.

We see, too, the stylised silhouette of two bar stools beside a very simple list menu descriptions : YAOURT (yoghurt), CAFÉ (coffee), THÉ (tea), which are typical of the maquis restaurants’ hand-painted signs.
A little slice of convivial African life for your home…
Hand tufted, sculpted wool rug with 4 different tuft heights. Finished with fringes at both extremities. Available in a single multicolour version. For dimensions, please allow for a tolerance of +/- 3 % in terms of length and width.

Marta Bakowski was born in Paris in 1986.
During the eight years she spent first in London and then Berlin, she developed and cultivated a transversal approach, building on a type of design which evidenced curiosity the creative and manufacturing processes, skills and expertise.

A graduate of Saint Martin’s School (2009) and then the Royall College of Arts (2011) in London, she went on to work in the studio of Dutch designer Hella Jongerius, whom she assisted for around two years.

On her return to Paris at the end of 2013, she opened her own design studio, in which she questions the language of everyday objects, paying particular attention to colour and materials. Produced either on an industrial scale or in small series, her objects are simple, graphic and with basic functionality, echoing her travels and her curiosity in terms of traditional techniques.