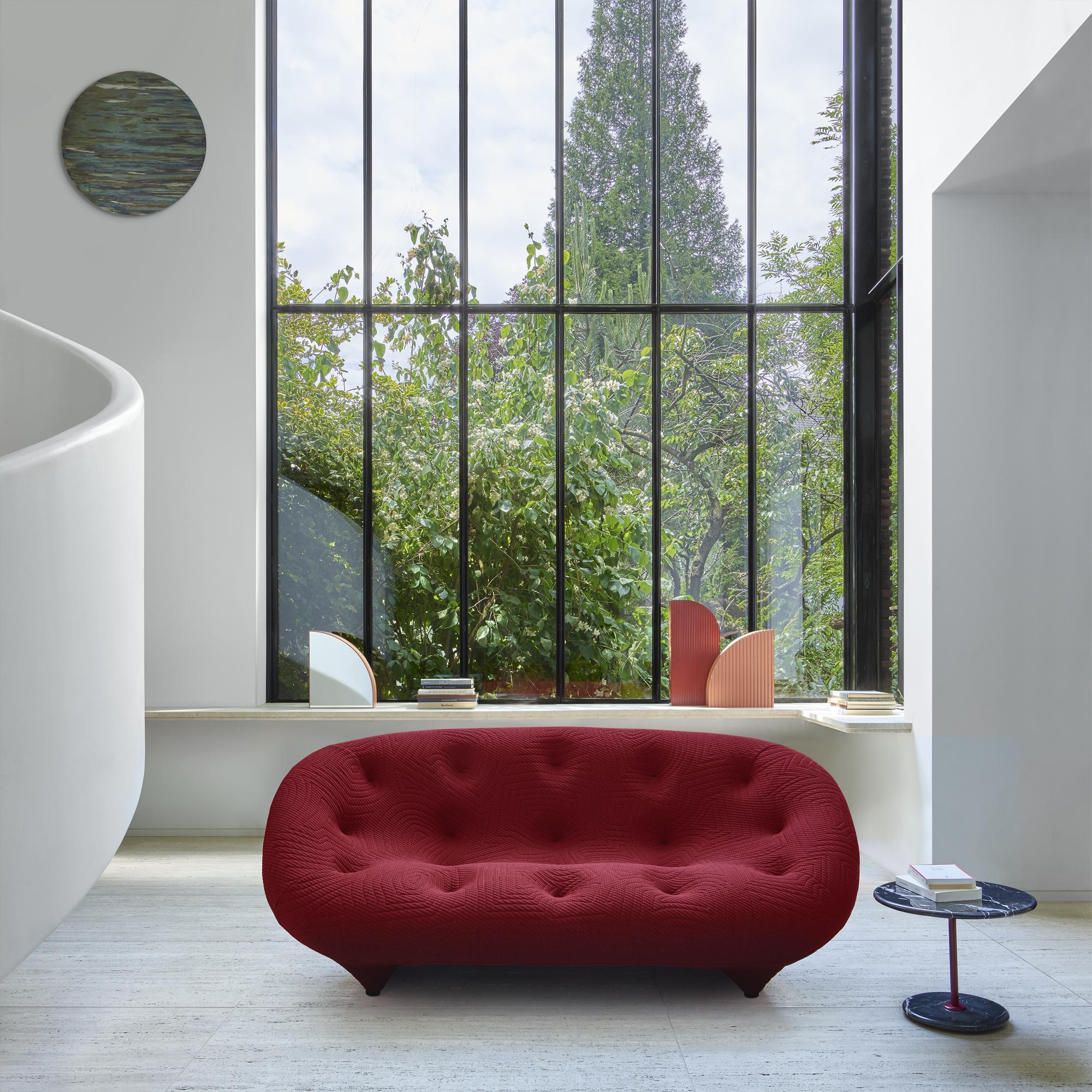 The Ploum settees are the fruit of much research into comfort. And the result: a combination of two specific materials which, when associated with the real dimensional generosity of the Ploum settees, offers an extremely high level of comfort whilst giving the body the chance to adopt a number of possible postures. As per the designers’ wishes, the large settee is asymmetrical in construction : the right-hand backrest is a little higher than the one on the left, whilst the right-hand seat is slightly deeper than the left-hand one and the zip on the rear of the backrest is off-centre.

The seat of the large settee, which may accommodate up to 4 persons, has a slightly closed angle perfect for encouraging sitters to move closer together, which in turn facilitates conversation between the occupants of the settee. The great flexibility of contact associated with a freely-formed shape turn Ploum into a veritable nest: in fact, all positions are possible here, with both back and head enjoying the same soft contact, no matter which part of the seat is concerned, even the arms.

MAKING-UP
Cover made from a woven fabric generously
quilted and quilted by points of stitching.
Cover may be removed by an upholsterer.
Important : items upholstered in MOBY have no
diagonal stitching in the four inside corners of
the seat/back section and have just one zip
closure on the rear of the back. 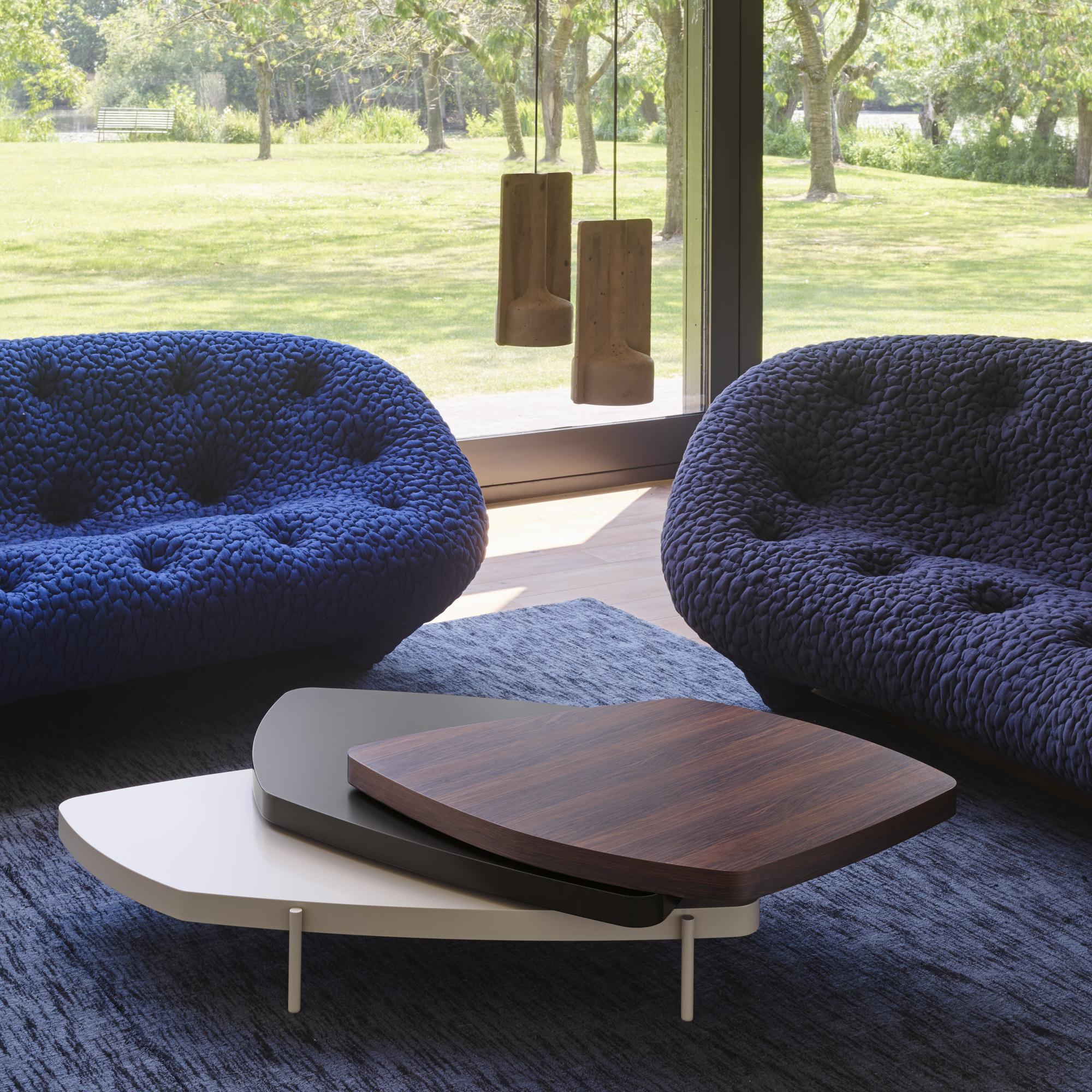 Ronan and Erwan Bouroullec were born in Quimper, in 1971 and 1976 respectively. On leaving the Ecole Nationale des Arts Décoratifs, Ronan began working independently, assisted more and more by Erwan, who was then studying at the Ecole des Beaux-Arts de Cergy. They have been working together officially since 1999. Their collaboration is a permanent dialogue, feeding on their individual qualities and driven by mutual requirements.

Giulio Cappellini discovered them in 1997, when their ‘dis-integrated kitchen’ was presented at the Salon du Meuble de Paris. From this meeting was born an uninterrupted collaboration, which was cemented by numerous projects from 1999 onwards. In 2000, Issey Miyake called on them to design a space to house his new clothing collection A-Poc in Paris. That same year, a meeting with Rolf Fehlbaum, President de Vitra, led to the production, in 2002, of a new desk system called ‘Joyn’, which marked the début of their collaboration.

Today, Ronan and Erwan Bouroullec work regularly with a number of manufacturers such as Vitra, Cappellini, Issey Miyake, Magis, Ligne Roset, Habitat and Kréo. Simultaneously, they also work on architectural projects such as ‘la Maison flottante’, an artist’s studio destined for the Centre d’Art, Chatou.

Elected ‘créateurs de l’année’ at the Salon du Meuble in 2002, they have been awarded, to name but a few, the New Designer Award of the New York International Contemporary Furniture Fair in 1999, the Grand Prix du Design de la Ville de Paris in 1998 and the first prize in the Biennale du Design de Saint-Etienne in 1998. They were also named Designers of the Year by Elle Décoration Japan in 2003.

They lecture from time to time in a number of art or design schools. Ronan Bouroullec lectures at the Ecole Cantonale d’Art de Lausanne, Switzerland.