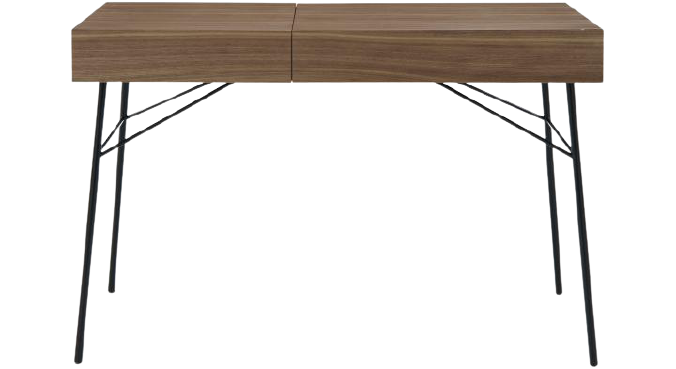 Feminine furniture par excellence, the Juliette dressing table is particularly graceful. The dressing table space offers a large work surface. This is complemented by a drawer and a second storage space closed by a lift-up cover. This cover has a large mirror on its internal face, which can be used when the cover is in open position.

The whole piece is made from panels of MDF finished in blond American walnut veneer, which brings a touch of both richness and warmth. This dressing table may also be used as an apartment desk.
Black lacquered steel base. Internal dimensions (in cm) of storage space: H 8.8 W 48 D 51.5. Internal dimensions of drawer: H 5 W 63 D 41.5.

Evangelos Vasileiou was born in Athens in 1976.

After graduating in interior architecture and product design from the école Camondo, he continued his architectural studies at the école de Paris-Malaquais , where he obtained his DPLG.

In 2001 he was honoured with an ‘appel permanent’ from the VIA, and has subsequently worked in the fields of architecture, design and education.

A popular guest lecturer, he is currently temporary professor in the first year masters’ course at the école d’architecture de Paris-Malaquais. In design terms he collaborates with a range of companies, whilst simultaneously working on refurbishment and scenography projects.

His works appear in a number of exhibitions and galleries, both in France and abroad.

Based in Paris, he opened a second agency in Athens in 2007, dealing principally with architectural and interior design projects.